The Great Mystery of Jack the Ripper, Part I

Warning: The subject of this Intelligence Briefing may not be suitable for minors or the mentally impaired.

Part I:  The Abyss

It is as thrilling as a treasure hunt to scrutinize a mystery and discover the truth … whatever it is.

Nothing is as captivating as a great mystery, or as intriguing as one being investigated.  If you do not agree, then you have too many mysteries in your life and not enough truth.

Imagine Victorian London in the autumn of 1888, in the dead of a moonless night.  Fog swirls about the streets and narrow alleys, momentarily revealing and then, again, enveloping gaslights.  Only the wheels of a covered carriage clattering over cobblestones in the distance break the midnight silence.  Suddenly, a faceless figure shrouded in black and armed with a long razor-sharp knife strides into a shadowed narrow passageway.  Behind him, in the darkest corner of a courtyard, lies the brutally butchered body of still another victim of “Jack the Ripper,” the world’s most famous serial killer.

This is the classic “whodunit?”  There are six reasons why the legend of Jack the Ripper is the world's most famous murder mystery.

First, the newspapers of his day sensationalized him across Europe and the Atlantic; no other serial killer had ever received such wide-ranging publicity.

Second, he did not merely stab his victims to death.  He mercilessly slaughtered them, as a farmer might gut a barnyard animal.

Third, he disposed of them incredibly quickly, often executing and then butchering them within just a few minutes, leaving their still-warm bodies to be discovered before their flowing blood could even clot.

Fourth, with blood-drenched hands and stained clothing, he abruptly vanished, time after time, as one observer noted, as if “through a trapdoor in the Earth.”

Fifth, he had no obvious motive.

Sixth, even though the authorities knew how, and to a significant degree whom, when, and where he would kill, he continually baffled both the London City Police and Scotland Yard.

Any mystery contains one or more lies.  Over time, one of two things occurs with any mystery.  Either sufficient truth comes to light for the lies to be seen and for the mystery to be solved, or enough new lies are introduced to cause the mystery to deepen, and darken, and persist.  The fact that Jack the Ripper has become one of the world’s most famous murder mysteries tells us that there have been too many assumptions that things that happened did not, or that things that did not happen did, or both.

Some of the lies of this mystery exist because a profusion of false information has been disseminated for well over a century.  It began with unverified stories by reporters at the time of the Ripper’s murders, intended only to sell more newspapers, and continues throughout the world today in the form of erroneous books, plays, films and television documentaries.

Other lies about the Ripper exist because some information about the crimes has been lost.  Obfuscating the truth further, insignificant details have been stressed by many authors, while important facts have been ignored.  In the process, dozens of investigators have purported to have finally discovered the identity of Jack the Ripper, which they have offered to the public in books alleging that the case has been closed, and the final chapter written, and the final solution revealed, and the mystery solved, and the bloody truth exposed.   Yet, all have fallen prey to their own glaring inaccuracies … while the mystery of Jack the Ripper endures and increasingly confounds.

Regardless of what you may have heard, the Ripper did not wear a formal top hat and cape, and carry a Gladstone bag.  Aside from the fact that he murdered people with a knife in Victorian London, probably everything else that you know about who he was and what he did is false.  Those are the lies that envelop the mystery.

The Ripper murdered so viciously that few people have ever been willing to confront the horrific details, which has only added to the mystery and its endurance.

Let’s intelligently review some of the verifiable evidence that has survived from the late 1800s into the twenty-first century..  Some of it may be difficult to face, but it is an axiom of life that anyone who lacks the courage to look, also lacks the ability to understand.

Actually, the Ripper’s slayings were not centered in London, but in what is known as the East End, in a district just northeast of the city, called Whitechapel.  That is where you can still find the Whitechapel Bell Foundry, Britain’s oldest manufacturing company.  It was founded in 1420, during the reign of Henry V, a lifetime before Columbus sailed to America.  It was at that foundry that America’s original 2,000-pound “Liberty Bell” was manufactured, in 1752, and the 27,000-pound “Big Ben,” in 1858, for the clock in the Palace of Westminster..

North of the Whitechapel Bell Foundry is Old Spitalfields Market, established by Charles II, in 1682.  There the merchants used to hang up second hand clothes on hooks above the market stalls.  Customers asked that items be handed down, so that they could get a closer look, hence the expression “hand me downs.”  The market is barely outside of London, only a few blocks east of a street known as Houndsditch, where a large trench once ran just outside the Roman wall marking London’s perimeter, into which garbage was continually thrown, including dead hounds.

In 1888, Whitechapel was a maze of filthy streets, alleys and courts.  Its name was synonymous with overcrowding, poverty, squalor and unsanitary conditions. Although murders were infrequent in Spitalfields, other crimes were common.  Yet, the residents of the mire were not to be feared, as much as pitied for their unfortunate lot.

The worst area was in Spitalfields, across the street from Old Spitalfields Market, near “The Ten Bells” pub, which was established in 1752.  Next door was “Itchy Park,” a churchyard described years later by Jack London in his book, The People of the Abyss.  In it, the author studied the residents there near the beginning of the twentieth century, each of whom seemed to fear what Jack London called “the thing,” which was the illness, injury, or other personal catastrophe that would push the person over the edge, into the abyss, from which there was no escape.  For some, the thing was Jack the Ripper, for it was there, near The Ten Bells, that he stalked and disemboweled his ill-fated victims. 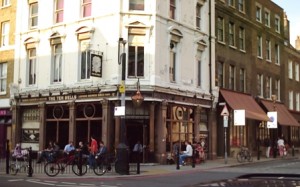 When the massacre began, it was known at first as the Whitechapel murders.  Later, when it soon became apparent that a single mastermind was responsible, the slayings were attributed to Jack the Ripper.  The Ripper, however, did not commit all the murders, just most of them, all within a radius of less than one-half mile.  In all probability, his victims totaled six.  Because of his swiftness, invisibility and brutality, he drove the residents of Whitechapel to the highest pitch of terror.

In the early morning darkness of 7 August 1888, Jack the Ripper struck his first victim, Martha Tabram.  She had been born in the London borough of Southwark, 39 years before.  When she was 16, her father had died unexpectedly.  Then at age 20, she had married Henry Samuel Tabram, a foreman furniture packer, with whom she had two sons.  Just a few years later, Henry left her due to her alcoholism, but continued to provide her with financial support.

Three years later, she moved in with Henry Turner, a carpenter, who was also troubled by her drinking.  “If I gave her any money,” he said, “she generally spent it in drink.  In fact, it was always drink.”

Throughout the next 12 years, they occasionally separated briefly.  Then Turner lost his job, and they both walked the streets, hawking needles, pins and key chains.  Finally, they fell behind in their rent and he left her again, at which point she became destitute and finally resorted to prostitution.  The going rate in Whitechapel at that time was three pence.  Turner, though, continued to give her what little money he could for small trinkets, in the hope that she could eke out a meager, but decent, living. 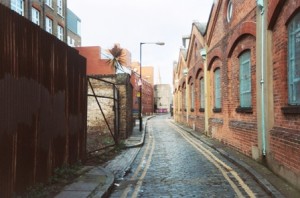 Another prostitute, known on the streets as “Pearly Poll,” had seen Martha and a soldier walking up a narrow alley in Spitalfields, called George Yard, toward George Yard Buildings, just before midnight.  George Yard Buildings was a block of the most squalid dwellings.  After she had completed her transaction with that “John,” just about four blocks from The Ten Bells, no one seems to have seen Martha Tabram alive during the next three hours … except Jack the Ripper.

At about 1:40 a.m., a young couple arrived home at George Yard Buildings.  In the darkness, they climbed the stone stairs to the landing and entered their lodging.  Moments later, the wife descended the stairs again, quickly bought some provisions at a nearby store, and then returned, climbing the stairs again at about 1:50 a.m.  Neither she nor her husband had noticed anything unusual

At 3:30 a.m., George Crow, a cab driver, returned home to George Yard Buildings and noticed someone lying in the darkness, on the landing.  Thinking that the person was sleeping though, he took no further notice.

Martha had died from what a physician determined was “hemorrhage and loss of blood.”  He estimated her time of death as about 2:30 a.m., which corresponds with the “sleeping” body noticed by the cab driver at 3:30 a.m.

No blood was found on the stairs leading to the landing, indicating that Martha had been murdered on the landing, where she was found.  However, not a single resident of George Yard Buildings had heard the faintest sound of trouble during the night.  Even the superintendent of the buildings and his wife had both slept soundly behind a door only 12 feet from the corpse.  (I doubt that they slept as well the next night.)

George Collier, the deputy coroner, called the killer “a perfect savage,” and described the atrocity as “… almost beyond belief …one of the most dreadful murders anyone could imagine.”

A local newspaper proclaimed that Martha Tabram had been “literally butchered.”

A few days later, about 70 local residents appointed a committee of 12 men to patrol the streets at night.  If the murderer planned to strike again, he would have to be exceedingly careful, and crafty.

Nevertheless, Jack the Ripper’s reign of unholy terror had only just begun; that fact would become apparent soon enough.  Soon the newspapers would conclude that his savagery was not only “beyond comprehension,” but entirely unfit for publication.  Jack the Ripper had learned well from his first experience and now believed that he could kill at will, and more efficiently, and far more horrifically … and he soon would.